Microsoft Convergence New Orleans 2013 - Getting there

Well, I am finally in New Orleans, Louisiana!

The city is named after Orléans, a city located on the River in Centre, France, and is well known for its distinct French Creole architecture, as well as its cross-cultural and multilingual heritage. New Orleans is also famous for its cuisine, music (particularly as the birthplace of jazz), and its annual celebrations and festivals, most notably Mardi Gras. The city is often referred to as the "most unique" in America.

In this occasion, I have the pleasure of traveling with my beautiful wife, Marina. We both headed to the airport around 11:00 AM Atlanta local time to catch our 1:30 PM flight to New Orleans. At the airport, we ran across Aaron Donat, Escalation Engineer at Microsoft, on his second leg (of three) from Fargo, North Dakota. Aaron and I will be presenting a session on the Microsoft Dynamics GP 2013 Web Client at GP Partner Connections (GPPC) PreGAME.


Aaron and I got to go over the objectives of our session and had a chance to catch up on a few projects we are both collaborating on, which made for a fun departure wait time.

The flight from Atlanta to New Orleans was an easy 50 uneventful minutes trip, so there was only time for a few pretzels on board my favorite airline, Delta Airlines. The air over the Gulf - that would be the Mexican Gulf - tends to be a bit dense, so the view is tinted by a haze, but still breathtaking.


Upon arrival at the Louis Armstrong New Orleans International Airport, we went straight to claim our luggage and find our way to the taxi line. At the main lobby down to baggage claim area, the first visual element is a great sculpture from renown artist Steve Kline.

On our way to the hotel and approaching the downtown, the first major landmark that stands out from the freeway is the Mercedes-Benz Superdome, home of the New Orleans Saints NFL football team. The Superdome was used as a "shelter of last resort" for those in New Orleans unable to evacuate from Hurricane Katrina when it struck in late August 2005.

Approaching the Hilton Riverside Hotel, we passed just in front of the Ernest N. Morial Convention Center, home of Microsoft Dynamics Convergence 2013. They were still a number of cranes and personnel putting the final touches to the different facilities inside the Convention Center that will be hosting the approximately 11,000 attendees.

Well, my wife and I finally made it into the hotel and checked in after leaving Aaron at the Hyatt Hotel. Our room had a great view to the New Orleans Port.

It was time to find something to eat. After all, our flight was short and therefore no on board service was provided. On our way to get some food we strolled down Poydras Street and capture a couple images of Fulton Street walkway...

... and plastered banners announcing Microsoft Dynamics Convergence. Definitely, a lot of hoopla to make our presence felt in New Orleans.

Well, after some strolling and quite undecided where to have some food, we hopped a cab and went to the French Quarter.


The French Quarter, also known as the Vieux Carré, is the oldest neighborhood in the city's East Bank. When New Orleans was founded in 1718 by Jean-Baptiste Le Moyne de Bienville, the city was originally centered on the French Quarter, or the Vieux Carré ("Old Square" in French) as it was known then. While the area is still referred to as the Vieux Carré by some, it is more commonly known as the French Quarter today. Although called the "French" Quarter, most of the present day buildings were built under Spanish rule and show Spanish colonial tastes. The district as a whole is a National Historic Landmark, and contains numerous individual historic buildings. It was affected relatively lightly by Hurricane Katrina in 2005, as compared to other areas of the city and the greater region.

My wife and I ended up having some late lunch at Deanie's Seafood Restaurant. Deanie's is been around for over 50 years and is considered an institution by both locals and out of towners alike. It was time to order some good oysters and gumbo with a good Amber. You have to visit this place to appreciate some good seafood.

Off we went to another institution in town: Cafe du Monde.

Café du Monde is a coffee shop on Decatur Street in the French Quarter. It is best known for its café au lait and its French-style beignets. The coffee here is blended with chicory.

It is open 24 hours a day, 7 days a week, except for Christmas Day and days when "the occasional hurricane passes too close to New Orleans", and is patronized by both locals and visitors. Due to Hurricane Katrina, the shop closed at midnight on August 27, 2005. Although it suffered only minor damage, it remained closed for nearly two months. Owners took advantage of the low traffic time afterwards to refurbish the eating areas and kitchens. Definitely a good place for people watching, and good luck finding somewhere to sit.

On our way back to the hotel, we passed next to Jax Brewery.

Jax Brewery, a unique New Orleans landmark, was once the brewing and bottling house of Jax Beer from 1891 until the mid 1970s. Today the converted brewery holds exclusive and distinctive New Orleans shops as well as nationally known stores. A museum devoted to the brewery is free and open to the public. Stroll through the shops of Jax Brewery, grab a bite to eat or admire the view of the Mississippi River from the Museum or the building's beautiful patio.

Back at the hotel, I was bound to run into someone, right? Well, I found the team from Fastpath along with Pam Misialek, who this time managed to jammed her foot into a hole and is now hopping around.

Well, it was time to go to bed as we had been walking around for about 4 hours. My wife managed to blistered her big toe and that's the story for another blog.

Popular posts from this blog

Why my transactions don't post through GL even when I have the flag selected? 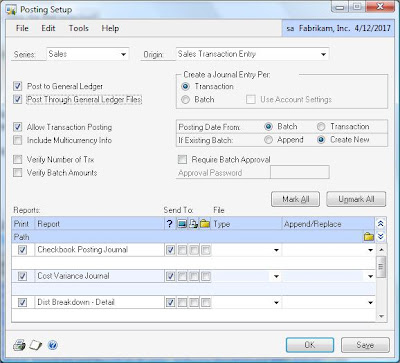 Are you tired of asking why is it that some transactions do post through GL and why some don't? Tired of changing the posting settings to no avail? This issue outta be one of the most confusing issues for users and consultants, new or seasoned alike. If you ever struggle with one issue in GP, please tell me it's this one, because even today, I cannot claim victory over this subject. So let's walk the walk together. What the theory says? According to Part 3, Chapter 13, page 87 of the Microsoft Dynamics GP's System Setup guide, " If you mark the Post Through General Ledger Files option, batches posted in other modules automatically will update the module in which the transactions originated and the appropriate posting accounts in General Ledger. Your transactions will post to General Ledger and not through General Ledger when posting transaction individually (without a batch). " Now lets break it down... It's important to really pay close attention
Read more

Just recently, I was asked by a customer to address an issue with their line item comments truncating at 4 lines. In essence, the customer wanted the ability to print more than 4 lines of comments at the line item level on their purchase orders. My customer happens to be in the Nuclear Waste Management industry, and as it turns out, they have strict requirements to provide contract information, start/end dates, and a number of regulatory and compliance information on purchase orders. Some of this information is very critical to the transportation of certain products on United States highways. So as you can imagine, the request for additional comment lines was critical. The following shows an example of what the customer was facing: Purchasing Comment Entry window and POP Purchase Order Blank form As you can see, the comments are printing only 4 lines and truncating the rest of the text. Before going into the details, they are a few articles that guided me thro
Read more 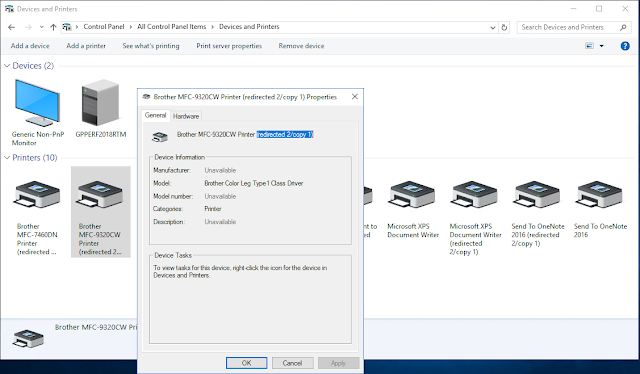 A lot of the guiding principles for deploying Named Printers in a Terminal Server or Citrix environment comes from two of my favorite articles, written by my good friend and fellow Microsoft Business Applications MVP, David Musgrave  (twitter: @winthropdc ). David happens to be the creator of Named Printers and probably understands the product better than anyone I know. You can read his articles here: Using Named Printers with Terminal Server Using Named Printers with Terminal Server Revisited These articles continue to be very relevant if you are in an environment where a Print (or Printer) server is the norm and published printers are standard. Print servers are used to interface printers with devices in a network, but mostly to standardize administrative policies, and balance the document load that printers can manage. Part of the standardization is to ensure printers are uniquely identified across the networks, regardless of whether you are accessing the network remotely or ph
Read more