Showing posts from September, 2011
Show all

Jumping on the Windows 8 Metro bandwagon

In my most recent In My Humble Opinion article I weigh in on the subject of Windows 8 Metro and Microsoft Dynamics GP "12" web client, and Microsoft's decision to go it the Silverlight route. Read why I think Silverlight is still the best choice as a development platform and how Windows 8 can still drive business applications requiring rich controls on the front-end. You can read the article at - Jumping on the Windows 8 bandwagon  on the Community site. For more information on Windows 8, including a link to download the Developer's edition, click below: Read more at the Microsoft News Center Download the Windows Developer Preview Until next post! MG.- Mariano Gomez, MVP IntellPartners, LLC http://www.IntellPartners.com/
Post a Comment
Read more

Ok, of course my dear friend Corey in Louisville, Ohio had to challenge my post from yesterday and ask a question that is, frankly, a logical and natural progression of things - see Year-to-year Inventory Margin Report using the PIVOT operator in T-SQL . In yesterday's post I showed a query that could create a year-to-year Inventory Margin report using T-SQL's PIVOT operator. The query, while very useful, hardcodes the years you want to display in the pivoted columns list. An excerpt of the PIVOT operator and the pivoted columns list as follows: . . . PIVOT ( SUM(MARGIN) FOR TRXYEAR IN ([2014], [2015], [2016], [2017]) ) AS pvt So naturally, Corey's question was, " What if I want to add the pivoted columns list dynamically, instead of hardcoding them? ". Since all transactions have a date, it would make sense to add the list of years based on the document dates. The good news is this is possible. For this we would need to create a dynamic pivoted list using
1 comment
Read more

As of late I have been camping out at the SQL Developer Center's   Transact-SQL Forum  and I have to say, I have learned a great deal from my fellow SQL Server MVPs. Very alike the Microsoft Dynamics GP MVPs, these folks are willing to resolve pretty much any T-SQL request that comes across the forum. So long you follow some simple posting guides, like including your table definitions, providing some sample data and detailing your expected results, there's nothing these folks won't do for you. I decided to put some of what I have learned to the test by creating a T-SQL query that would produce a Year-to-year Inventory Margin Report (in currency) by using the T-SQL PIVOT operator. My fellow MVP Mark Polino is very well versed with Microsoft Excel and PowerPivot and I thought this would be a way to demonstrate that you can still use T-SQL to resolve some very complex issues which otherwise would require the use of front-end tool or some back-end cubes. The following que
2 comments
Read more 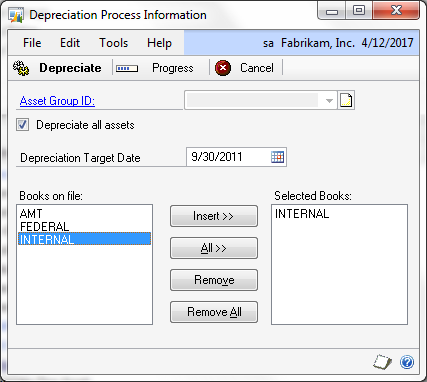 I just completed a full upgrade of Microsoft Dynamics GP from version 9 to version 2010 R2 for a client and they were going through their first month-end closing in the upgraded system. 3 weeks ago, after the upgrade, they reported experiencing an issue running Fixed Assets depreciation from two laptop computers, where apparently, when running depreciation the system would hang. The only option to recover would be to terminate the Dynamics.exe process from Task Manager. Nonetheless, we did not pay much attention to this at the time since the process was completed successfully from another machine, just in time to close the month of August - more on this later. The client called back on Thursday morning, letting me know they were ready to run Fixed Assets depreciation again, and this time I offered to be onsite to see the problem first hand. So effectively this past Friday morning I drove to their location and stood behind the Sr. Accountant to see the process in action and spot any p
10 comments
Read more

Microsoft Dynamics GP, the next generation of end-user customization tools?

My new article is out on my Community column blog, In my humble opinion with The Dynamics GP Blogster . This time, I take a swipe at some significant improvements that could be added to the customization and integration tools like Modifier, Report Writer, and Integration Manager, just by switching out the programming environment and scripting languages, Visuals Basic for Applications and VBScript for Visual Studio Tools for Applications and PowerShell, respectively. Far fetched? Not quite, go on and read my reasoning behind this, over at the Community's website. Microsoft Dynamics GP, the next generation of end-user customization tools? For more information on all the programming languages and environments, check the following links: VBScript    http://msdn.microsoft.com/en-us/library/cc175562(v=vs.90).aspx Visual Basic for Applications    http://support.microsoft.com/kb/163435 Visual Studio Tools for Applications 2.0    http://msdn.microsoft.com/en-us/library/cc1755
1 comment
Read more

Getting the Next Voucher Number for a Payables Transaction Integration

Could not load file or assembly 'Microsoft.ReportViewer.WinForms' after upgrading to Integration Manager 2010

When trying to run an integration in GP2010 (after just upgrading from 9.0), you may receive the following error: Log Report Failure Could not load file or assembly 'Microsoft.ReportViewer.WinForms, Version=9.0.0.0, Culture=neutral, PublicKeyToken=b03f5f7f11d50a3a' or one of its dependencies. The system cannot find the file specified. The latest versions of Integration Manager now incorporate the ReportViewer Control for displaying the different reports generated by the application. If you receive the above error, install the ReportViewer Redistributable component from one of the following locations: http://www.microsoft.com/download/en/details.aspx?displaylang=en&id=21916  (Visual Studio 2005 components) or http://www.microsoft.com/download/en/details.aspx?id=6576  (Visual Studio 2008 components) The latter will work just fine with Microsoft Dynamics GP 2010 or 2010 R2. It is also recommended to install the 2007 Office System Driver Data Connectivity Compo
6 comments
Read more

Wise up with Wiseguy 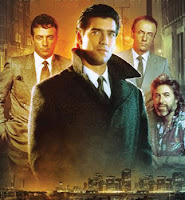 Just a few days aback, I wrote an article referencing the acclaimed 1984 movie, Ghostbusters. In this occasion, my friend and fellow MVP, Mark Polino , makes an appearance with his new short fictional story, Wiseguy. Wiseguy is a new twist to the classic mob tale. Prospective mobster Joey is stunned to learn that the family business is going to start filing tax reports with the IRS due to the power of Microsoft Dynamics GP. With the help of Jersey girl, Isabella, Joey must learn to collect cash using Microsoft Dynamics GP, instead of the traditional baseball bat method. Wiseguy highlights some powerful features in Microsoft Dynamics GP including the Collections module, Accounts Receivable, EFT, and Scheduled Payments. It also highlights The Closer and The Validator . The story shows how learning Microsoft Dynamics GP can be fun and entertaining. You can download Mark's work for free using a code from Reporting-Central  - With a name like Gianmarco Salsano backing up Mark, y
Post a Comment
Read more
More posts